admin
What Are You Afraid Of?
何を怖れる (Nani wo Osoreru)
Wednesday, July 15, 6:30 PM
DOCUMENTARY FOCUS
INTERNATIONAL PREMIERE
Introduction and Q&A with director Hisako Matsui
Moderated by Joel Neville Anderson (JAPAN CUTS 2015 Programmer), with interpreter Marie Iida.
A (her)story told through the very people involved in the women’s liberation movement beginning in Japan in the 1970s, filled with personal accounts of why they joined the movement and ideas about work that is still left to be done. Female director Hisako Matsui (Leonie, JAPAN CUTS 2012) draws out episodes from these torch-bearing women, touching on a wide range of subjects from gender inequality, marriage, social structures, women’s studies and journalism to aging. A testament to feminism in different forms, the film serves as both a powerful introduction to those unfamiliar with the history and a celebration of the women who paved the way and continue to work for a better future.
Japan. 2015. 120 min. Blu-ray, in Japanese with English subtitles. Directed by Hisako Matsui. With Mitsu Tanaka, Chizuko Ueno, Kimiko Tanaka, Tomoko Yonetsu, Keiko Higuchi.
Part of JAPAN CUTS 2015. 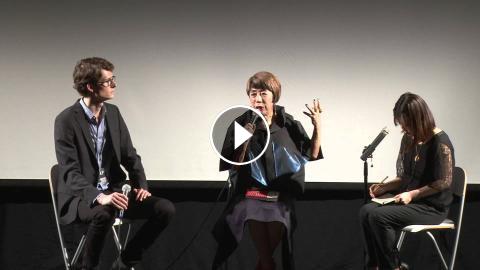