admin
This Country's Sky
この国の空 (Kono Kuni no Sora)
Saturday, July 18, 6 PM
FEATURE SLATE
WORLD PREMIERE
Introduction and Q&A with director Haruhiko Arai and star Youki Kudoh
Moderated by Joel Neville Anderson (JAPAN CUTS 2015 Programmer), with interpreter Marie Iida.
Acclaimed screenwriter and filmmaker Haruhiko Arai dusts off his director’s hat following his 1997 Body and Soul to turn a passion project of 30 years into a reality. An adaption of Yuichi Takai’s prize-winning 1983 novel of the same name, This Country’s Sky is a nuanced drama set in Suginami, Tokyo towards the destitute final years of WWII. Satoko (Fumi Nikaido) is a 19 year old girl falling passionately in love with her older married neighbor (Hiroki Hasegawa), who has been spared combat due to his failing the military physical examination. Even away from the battlefield, as they grow closer their feelings are caught up in the violence of war.
Japan. 2015. 130 min. DCP, in Japanese with English subtitles. Directed by Haruhiko Arai. With Fumi Nikaido, Hiroki Hasegawa, Youki Kudoh.
Based on the 1983 novel by Yuichi Takai, winner of the 1984 Tanizaki Prize
Part of JAPAN CUTS 2015. 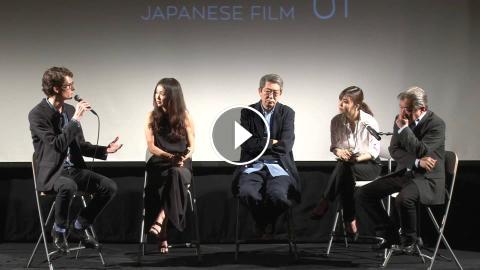