admin
100 Yen Love
百円の恋 (Hyaku Yen no Koi)
Thursday, July 16, 8:45 PM
FEATURE SLATE
CENTERPIECE PRESENTATION
NORTH AMERICAN PREMIERE
Introduction and Q&A with star Sakura Ando, with CUT ABOVE award ceremony
Moderated by Joel Neville Anderson (JAPAN CUTS 2015 Programmer), with interpreter Marie Iida.
Followed by the PUNCH LOVE Party!
Play video games with your nephew when he gets home from school, pick up junk food at the local ¥100 convenience store, and pass out reading manga. Such is the life of Ichiko Saito (played by the luminous Sakura Ando), a 32 year old living at home with her parents and recently divorced sister. When their working class home gets too small for both sisters, her mother pushes Ichiko into the world and she gets a job at the nearby konbini. She befriends a gruff amateur boxer (Hirofumi Arai), but cruel reality soon pushes her to don the gloves herself. As Derek Elley of Film Business Asia writes, “Ando triumphs in [this] quirky tale of a social misfit's transformation,” exceeding all expectations in a physical performance of absurd comedy and deep pathos.
Japan. 2014. 113 min. DCP, in Japanese with English subtitles. Directed by Masaharu Take. With Sakura Ando, Hirofumi Arai, Miyoko Inagawa, Saori Koide, Yozaburo Ito.
“The best performance of (Ando’s) so-far brilliant career” -Mark Schilling, The Japan Times
Part of JAPAN CUTS 2015.
Recipient of the CUT ABOVE Award for Outstanding Performance in Film
Sakura Ando appeared on the independent film scene in the late 2000s, rapidly establishing a reputation as a brave and unpredictable performer across comedy and drama with her debut in Eiji Okuda’s Out of the Wind and breakout supporting roles in Sion Sono’s Love Exposure, Yuki Tanada’s Ain’t No Tomorrows, Yu Irie’s 8000 Miles 2: Girls Rapper, and Kiyoshi Kurosawa’s Penance. With physically and emotionally demanding performances she has distinguished herself in increasing lead roles such as in Yong-hi Yang’s Our Homeland and is recognized as one of the most highly respected actresses in the industry, recently ranked as the 8th Best Japanese Actress of all time by Kinema Junpo. She was nominated for Best Actress at the studio-driven 38th Japanese Academy Awards for her role in the independent 0.5mm, and awarded the 88th Kinema Junpo Award for 100 Yen Love and 0.5mm. 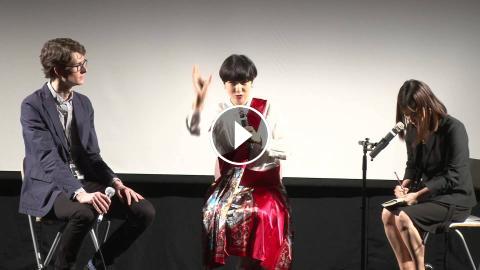