Reviving the legacy of Japan Society Gallery's Artist Residency program of the 1950s and 1960s, which gave international opportunities to such visionary talents as Shikō Munakata and Yayoi Kusama, the Gallery continues to act as the major springboard for newly emerging talents from Japan.

For the 2014 residency program taking place during July, we have selected Cyoko Tamai (b. 1987, Kōchi Prefecture; lives and works in Tokyo), who brings out the expressive potentials of the medium of ink on paper painting. Tamai skillfully treads the space between the apparent fragility of paper and the core strength of its material nature, accentuated by the subtlety of ink.

Come by the Open Studio on Saturday, July 19th to meet the artist and view some of her works.

Born in 1987 in Kōchi Prefecture, Japan, Cyoko Tamai received BFA in Music (2011) and MFA in Japanese Painting (2014) from Tokyo University of the Arts. In her work, she pursues "the finest lines that are the smallest unit of painting," using a steel dip pen rather than a paintbrush or ink brush conventionally used in Japanese painting. She considers her painting process "staining" of the thin fibers that comprise a sheet of paper. With the thin nib of her pen, Tamai pulls out fibers after fibers from the sheet of paper, literally deconstructing the painting surface to create an approximately two-inch-high, fuzzed relief that appears to defy gravity.

Tamai's work has been included in the 2009 Echigo-Tsumari Art Triennale in Niigata Prefecture even before she received BFA. Since then her work has been presented in various solo and group exhibitions in Japan, including: "Cyoko TAMAI Exhibition," Ginza Surugadai Gallery, Tokyo (2014); "What is Drawing--a show of competition winners," Galerie Simon, Tokyo (2012); "Young Artists," Daimaru Kochi, Tokyo (2013); "Next Art," Matsuya Ginza, Tokyo (2013); "ShinPA!!!!!!!," Obuse Museum of Art, Nagano Prefecture and Sato Museum of Art, Tokyo (2013). Tamai is a recipient of a grant from the Sato International Cultural Foundation in Tokyo (2013) and the Ataka Awards from Tokyo University of the Arts (2013). 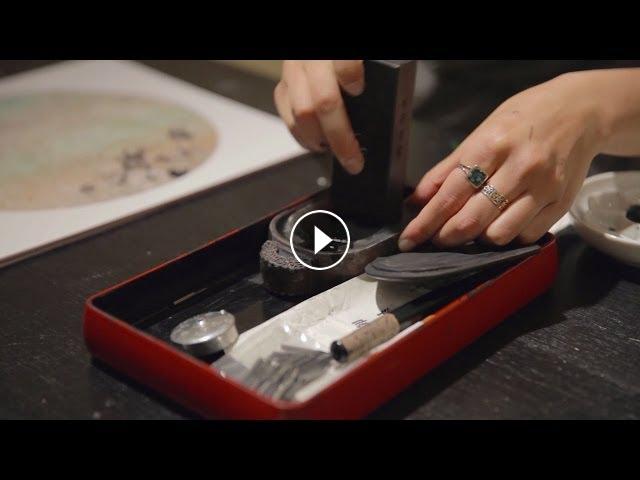 Reviving the legacy of Japan Society Gallery's Artist Residency program of the 1950s and 1960s, which gave international opportunities to such visiona...