Tonight’s tale is Remina — a tale of cosmic proportions no one will ever see coming! ????

More about Remina:
An unknown planet emerges from inside a wormhole, and its discoverer, Dr. Oguro, christens the body “Remina” after his own daughter. His finding is met with great fanfare, and Remina herself rises to fame. However, the object picks up speed as it moves along in its curious course, eliminating planets and stars one after another, until finally Earth itself faces extinction… Is the girl Remina the true cause of the catastrophe? A masterwork of horror from Junji Ito, unfolding on a universal scale.

About Junji Ito:
Junji Ito made his professional #manga​ debut in 1987 and since then has gone on to be recognized as one of the greatest contemporary artists working in the horror genre. His titles include Tomie and Uzumaki, which have been adapted into live-action films; Gyo, which was adapted into an animated film; and Fragments of #Horror​, all of which are available from VIZ Media. Ito’s influences include classic horror manga artists Kazuo Umezu and Hideshi Hino, as well as authors Yasutaka Tsutsui and H.P. Lovecraft. 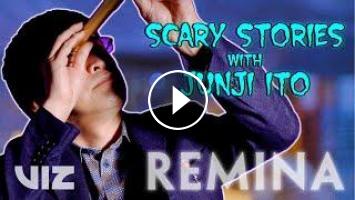 Welcome to Scary Stories with Junji Ito! ???? Tonight’s tale is Remina — a tale of cosmic proportions no one will ever see coming! ???? Read Remina : ...