Tonight’s tale is The Beautiful Boy at the Crossroads — a foggy tale of fortune telling gone wrong! ????

More about Lovesickness:
Ryusuke returns to the town he once lived in because rumors are swirling about girls killing themselves after encountering a bewitchingly handsome young man. Harboring his own secret from time spent in this town, Ryusuke attempts to capture the beautiful boy and close the case, but…

About Junji Ito:
Junji Ito made his professional #manga​​ debut in 1987 and since then has gone on to be recognized as one of the greatest contemporary artists working in the horror genre. His titles include Tomie and Uzumaki, which have been adapted into live-action films; Gyo, which was adapted into an animated film; and Fragments of #Horror​​, all of which are available from VIZ Media. Ito’s influences include classic horror manga artists Kazuo Umezu and Hideshi Hino, as well as authors Yasutaka Tsutsui and H.P. Lovecraft. 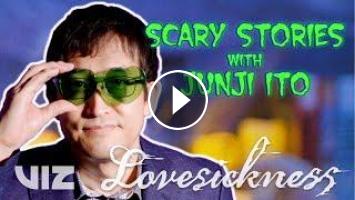 Welcome to Scary Stories with Junji Ito! ???? Tonight’s tale is The Beautiful Boy at the Crossroads — a foggy tale of fortune telling gone wrong! ????...