ava
First, Jairzinho Rozenstruik calls in ahead of his main event bout against Alexander Volkov at UFC Vegas 56: Volkov vs Rozenstruik. After, Matt and Jairzinho debate whether Doctor Strange or Top Gun is the better movie, Jairzinho opens up about how his fight against Curtis Blaydes impacted his approach to training and offers his thoughts on the potential return of Jon Jones and Stipe Miocic.

Then, after Matt tells Jim about his time in a karaoke bus with Michael Bisping and Julianna Peña last week, Michael Trizano makes his UFC Unfiltered debut. He shares how training at Tiger Schulmann growing up prepared him for a career in mixed martial arts, discusses some of his favorite moments from the Rocky movie franchise and opens up about handling his nerves during his UFC debut at the finale of Season 27 of The Ultimate Fighter.

Jim and Matt close the show by sharing their thoughts on the rumored bout between Tai Tuivasa and Ciryl Gane, and making predictions for UFC Vegas 56: Volkov vs Rozenstruik, including the co-main event between Dan Ige and Movsar Evloev. 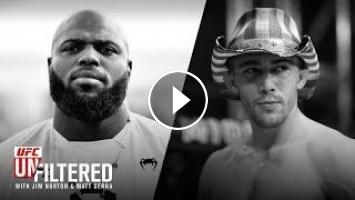 First, Jairzinho Rozenstruik calls in ahead of his main event bout against Alexander Volkov at UFC Vegas 56: Volkov vs Rozenstruik. After, Matt and Ja...