admin
At Keio University, the Sugiura Laboratory, in the Department of Mechanical Engineering (Faculty of Science and Technology) is investigating various phenomena through analysis and experiment. These phenomena involve coupling between electromagnetics and mechanical dynamics, as well as nonlinear dynamics. Currently, the researchers are focusing on three topics. The first is nonlinear oscillations in superconductive magnetic suspension systems. In such systems, objects are levitated, so energy loss due to friction is very low. This is expected to have applications to energy-efficient mechanisms.
Q. Using superconductivity, objects can be levitated, and what’s more, they can be levitated stably. The fact that objects can be levitated – that is, stably suspended without needing control – can be applied to transporting objects, or to storing energy. In this way, we can consider applications to linear motors, and to flywheel systems for power storage.
Recently, cases have been reported where supports for infrastructure have ruptured, due to aging degradation. Accordingly, regular maintenance is needed to ensure the safety of bridges, tunnels, power plants, and pipelines. The Sugiura Laboratory’s second research topic is ultrasonic flaw detection, as a method for nondestructive testing of such structures.
Q. Ultrasonic flaw detection is already widely used, but as regards the efficiency of testing, structures may be very large or numerous. Over the next few decades, as the number of old structures increases even more, I think the demand for testing will increase, too. So, it’s necessary to do such testing efficiently. One way of achieving that is expected to be the use of guided waves in ultrasonic flaw detection. In a long, large structure, it’s possible to achieve propagation over a long range, by inducing ultrasonic resonance. So, that system could be used to do the testing in one go, and we’re researching this.
Additionally, there’s a need to detect closed cracks, which occur at the stage before cracks open. These are transparent to ultrasound, and can’t be detected with conventional ultrasonic systems. So, the Sugiura Laboratory is also researching nonlinear ultrasonic waves to detect closed cracks. Meanwhile, the Lab’s third research topic is nonlinear oscillation in microbubbles, which are a contrast medium for ultrasound, and its application to healthcare.
Q. Microbubbles are a few micrometers in diameter, so they oscillate if they’re hit by ultrasonic waves. This is nonlinear oscillation. If microbubbles are introduced inside the body, cells reflect the linear component of ultrasonic waves, but with microbubbles, the reflection includes nonlinear components. By detecting those nonlinear components, we can achieve more detailed imaging: We can get more contrast in parts of blood vessels in the body where the microbubbles have been sent. So, in this research, we’re using microbubbles in healthcare applications.
As a further application in healthcare, it’s possible to improve the effectiveness of therapy by delivering drugs, adhered on microbubbles, only to the relevant part of the body, such as a malignancy. Such drug delivery systems are expected to have applications in localized therapy. In such ways, the results of research by the Sugiura Laboratory have become very topical, due to their potential for a wide range of applications, including linear motors, MRI, nondestructive testing in nuclear power plants and aircraft, and microbubble therapy. 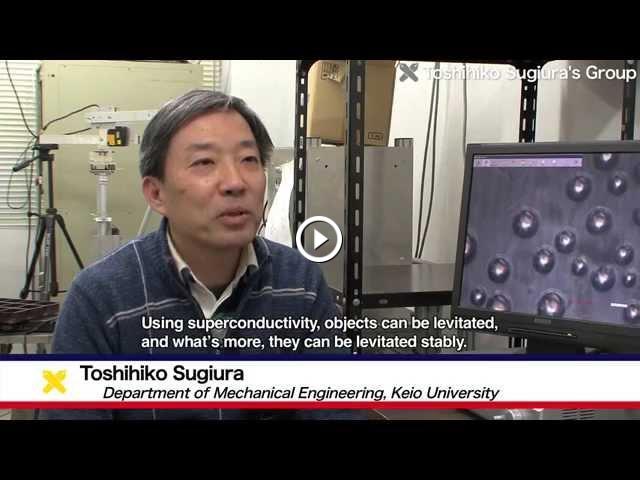 At Keio University, the Sugiura Laboratory, in the Department of Mechanical Engineering (Faculty of Science and Technology) is investigating various p...