Radicalism in the Wilderness - Mail Art by Sending Stones

Added 10 months ago by admin
31 Views
Radicalism in the Wilderness: Japanese Artists in the Global 1960s
March 9—June 9, 2019
Composed of artists from the northern Niigata prefecture facing the Sea of Japan, this collective was best known for their ephemeral and site-specific experience of Event to Change the Image of Snow (1970), which included the group members spraying an array of bright color pigments over the isolated, snow-covered dry riverbed of the Shinano River. GUN reprised the act four days later, and each event lasted only 30 minutes, as new snowfall quickly erased the huge color field abstraction. A GUN member, Horikawa Michio, also pioneered mail art with the Mail Art by Sending Stones series. For the series, Michio responded to the moon landing in 1969 by mailing 11 stones gathered along the Shinano River, critically echoing the Apollo mission to collect moon rocks for scientific research, as a way of turning human attention to the tumultuous Earth.
------
Visit:
Like:
Follow:
Watch:
Join:
Teach:

Radicalism in the Wilderness - Mail Art by Sending Stones 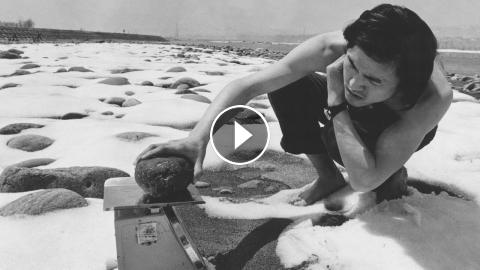 Radicalism in the Wilderness: Japanese Artists in the Global 1960sMarch 9—June 9, 2019Composed of artists from the northern Niigata prefecture facing ...