ava
Jimmy and will.i.am's teenage-girl alter-egos (Sara and mir.i.am) rap about things they think are "Ew!"

Oh, you got to see this.
Oh my gross I can't believe it.
She’s so basically basic.
She’s literally making me sick.

Look at look at this. OM-effin-G, what the eff?
You're gonna freakin' flip, like, seriously freakin' flip.
Cuz Sally's mad at Iggy because Iggy's booty's more biggy,
And Sally's booty's twiggy so she called her friend Cybie,
Now Sally's gonna get impleggies --

Where’d she get that outfit?
That girl is totally ratchet.
No seriously – who likes that? Ew!
Right right? Ew ew.

Look at the way she takes pics.
And what's up with those duck lips?
She's so lame.
Super lame. Ew, ew!

I am not hating,
I am merely conversating.
With my BFF Sara.
So bust your rhyme, Sara...

It’s mir.i.am and you know who,
Now here’s some things I think are EW!
FaceTime and reclining in airplane seats and then Vining, retweeting tweets I'm not lying cuz even rhyming's ann-iy-ing!
Bread bowls and ravioli, casserole, a roly poly caterpillar on my really old and moldy windowsill. Ew!
Trapper keepers and a creeper wearin’ sneakers with the toes and maybe Frozen cuz you knowin’ I don't wanna build a snowman. Ew! Ew!

Hello my name is Sara
That's Sara with no "H"
Too bad if you don't like it
Cuz haters gonna
Hate my Stepdad Gary
He tries to act so cool
Every time we see him
My friends and I say "Ew!"

Oh my gosh, it's my step dad Gary.
And he just ruined it! 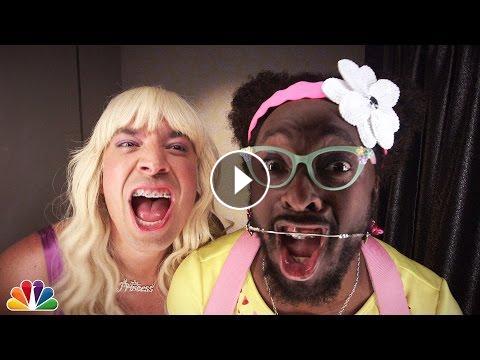 Jimmy and will.i.am's teenage-girl alter-egos (Sara and mir.i.am) rap about things they think are "Ew!" Download "Ew!" on iTunes: ...