admin
The Ferrari 488 Pista and McLaren 720S are two of Autocar's favourite supercars of the moment. Both are mid-engined, with turbocharged V8 engines making absurd amounts of power - more than 700bhp apiece.
They're great track cars and we've already tested them both, extensively, on track.
But what are they like as road cars? And what are they like when the going gets ordinary: as in, rain comes down and there are speed limits and other traffic to consider? Are they still enjoyable?
Join our editor-at-large Matt Prior and our special correspondent Mauro Calo - world-record drifter and the man who is hired to make 'the talent' look good on films and TV shows - as they discuss these two brilliant supercars and decide which is best.
New videos are uploaded to Autocar each week. Don't miss a single one. Subscribe now:
And for more supercar action, consider these videos:
McLaren Senna vs 720S | Part 1: 0-100mph-0 | Autocar:
Ferrari 488 Pista 2019 review - 710bhp supercar on road and track | Autocar:
Ferrari 488 Pista vs McLaren 600LT vs Porsche 911 GT3 RS | 0-100mph-0 and lap times | Autocar:
Visit our website at
Autocar, the world's leading motoring magazine and website, delivers industry-leading news, the most in-depth car reviews and opinion from our team of experts. Our presenters include some of the world's top motoring journalists who have unrivalled access to the world's fastest, rarest, most exotic and most exciting cars on some of the world's best roads and race tracks.
Follow AUTOCAR here:
LIKE Autocar on Facebook:
FOLLOW Autocar on Twitter:
FOLLOW Autocar on Instagram:
Check out our full video catalog:
For car reviews you can trust, subscribe to Autocar: 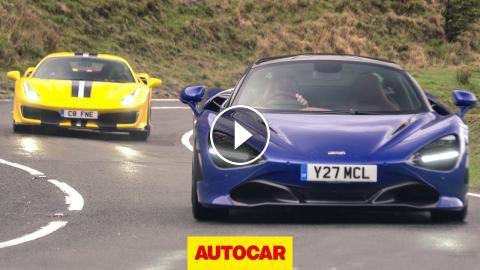 The Ferrari 488 Pista and McLaren 720S are two of Autocar's favourite supercars of the moment. Both are mid-engined, with turbocharged V8 engines maki...