Creating a concept of value for the next-generation through mechanism research.

Added 5 years ago by admin
415 Views
At the Morita Lab in the Department of Mechanical Engineering of the Keio University Faculty of Science, researchers are advancing with research and development of unique robots from the perspective of mechanisms, control, skill, and an integration of each of these areas.

Q. At my lab, research is focused particularly on mechanics and mechanisms in the area of mechanical engineering. Mechanisms and machinery are part of a field of learning that has the longest history amongst areas that pertain to mechanical engineering. This field is basically an area of learning that considers the relationship between two things, or in other words, the mutual relationship between one object and another and how to best achieve relative motion between the two.

Mechanisms to move robots.
Based on the general concept of robotic engineering, various high performance parts centered on motors are used to convert one movement into another. As a result, costs can increase, and a robot can become very expensive even when it is being built to perform a simple action.
However, at the Morita Lab, researchers are aiming to achieve higher performance, lower cost robots with energy savings by considering robotic design from the mechanism level based on entirely new concepts.

New mechanisms that don't rely on increasing the performance of the parts themselves are becoming visible and can be applied in a variety of situations. One of those mechanisms is a device called a self-weight compensation device.
This device uses spring force instead of motors and batteries to counter the weight of the arms and constantly maintain an appropriate posture.
With this device, even a heavy object can be moved with a small amount of force, and thus the device is helpful in lightening the load of a robot or operator and in improving precision.

Q. Put simply, we're thinking about mechanisms and coming up with ideas. In other words, as we observe the mechanisms and natural world around us on a daily basis, we're constantly thinking of ideas and wondering about trying new things. As we do this, sometimes we have what you could call inspiration as we come up with ideas that could possibly be put into practice. However, if we don't confirm those ideas ourselves to determine if they are actually correct, we won't know if they will function properly when we build them. What becomes important in a time like this is fundamental study. It basically becomes a field of learning."
"When we consider things with focus on mechanical kinematics and dynamics, we can examine in advance whether or not the ideas that we come up with are actually reasonable. Then, if we feel confident that an idea will likely go well, we actually design and verify the idea, and we confirm the resulting designs by conducting tests to determine if they reliably function how they should. We're conducting a lot of research like this.

Creating a concept of value for the next-generation through mechanism research. 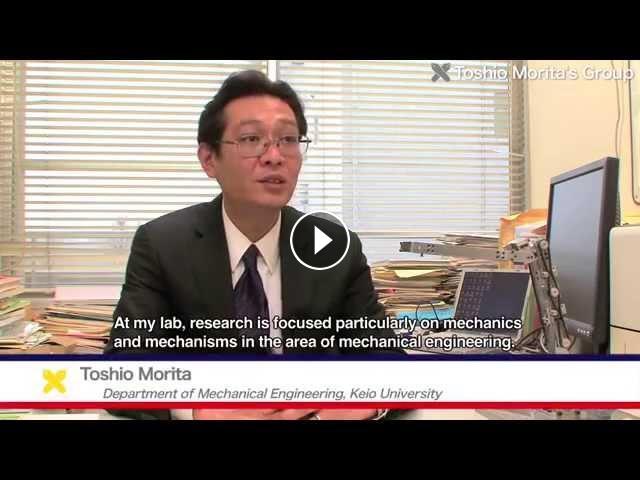 At the Morita Lab in the Department of Mechanical Engineering of the Keio University Faculty of Science, researchers are advancing with research and d...