Mini soccer balls in space: The World Cup may be over, but there are soccer balls still bouncing in space. Astronomers using NASA's Spitzer Space Telescope have discovered soccerball-shaped molecules, known as "buckyballs".

A fullerene is any molecule composed entirely of carbon, in the form of a hollow sphere, ellipsoid, or tube. Spherical fullerenes are also called buckyballs, and cylindrical ones are called carbon nanotubes or buckytubes. Fullerenes are similar in structure to graphite, which is composed of stacked graphene sheets of linked hexagonal rings; but they may also contain pentagonal (or sometimes heptagonal) rings.

The first fullerene to be discovered, and the family's namesake, was buckminsterfullerene C60, prepared in 1985 by Robert Curl, Harold Kroto and Richard Smalley at Rice University. The name was an homage to Richard Buckminster Fuller, whose geodesic domes it resembles. Fullerenes have since been found to occur (if rarely) in nature.

The discovery of fullerenes greatly expanded the number of known carbon allotropes, which until recently were limited to graphite, diamond, and amorphous carbon such as soot and charcoal. Buckyballs and buckytubes have been the subject of intense research, both for their unique chemistry and for their technological applications, especially in materials science, electronics, and nanotechnology. 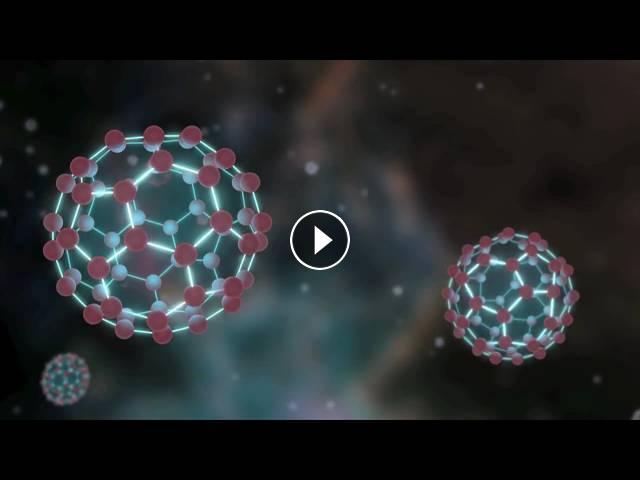 ... NASA/JPL: Buckyballs Fullerenes - Cosmic Soccer Ball Molecules. Mini soccer balls in space: The World Cup may be over, but there are soccer balls ...