ava
First, Michelle Waterson joins the show ahead of her co-main event bout against Amanda Lemos this Saturday at UFC Long Island: Ortega vs Rodriguez. She opens up about acting in the upcoming Netflix movie Havoc alongside Tom Hardy and Forest Whitaker, shares how she believes Carla Esparza becoming UFC strawweight champion impacts the rest of the division, and explains why she took the fight against Lemos after originally being booked to face Amanda Ribas.

Then, Jim and Matt make predictions for fight night, including the main event between Brian Ortega and Yair Rodriguez, and Miesha Tate's return to the UFC flyweight division against Lauren Murphy.

Brian Ortega closes the show ahead of his main event bout against Yair Rodriguez this Saturday in Long Island. He hints at whether or not he's married to UFC flyweight Tracy Cortez, shares what went through his mind when he nearly submitted Alexander Volkanovski during his last bout for the featherweight title and responds to Yair Rodriguez saying he expects a title shot if he defeats Ortega this weekend.

To order UFC Pay-Per-Views on ESPN+, visit https://ufc.ac/3NKBvmx (U.S. only) 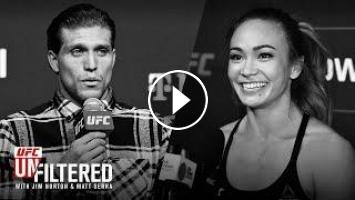 First, Michelle Waterson joins the show ahead of her co-main event bout against Amanda Lemos this Saturday at UFC Long Island: Ortega vs Rodriguez. Sh...