admin
At Keio University, the Imai Laboratory, in the Department of Information and Computer Science (Faculty of Science and Technology), is doing three research projects to make communication easier. These projects involve robots with artificial intelligence, telepresence robots, and technology for attaching sensors to people to make computers easier to use.
"For example, when people communicate with each other, they look at each other’s eyes, and when we point to nearby objects, we say things like “That one!” When the other person looks as well, they can use terms of reference, like “That’s good, right?” or “This is fine, isn’t it?” If people don’t understand something when they look at objects together, they’re able to use reference terms. We wondered how to incorporate that aspect of communication into robots, so when a robot finds a person, it makes eye contact, and looks at objects of conversation."
By gathering lots of examples of people’s unconscious actions and reactions, and incorporating the average values into robots’ programming, it’s possible to make robots with artificial intelligence behave and react just like people.
"Telepresence robot research has a long history, but our group started research in this field because actually, it’s very hard to move a robot with artificial intelligence. I think that telepresence robots will appear in the world a little sooner, and because they have people behind them, they can move easily. It’s people that make decisions about all the difficult problems, so previously, for example, if the president of a large company visited all its branches, he or she had to fly all around the world. So, the idea is that the president could use a robot to do that."
One feature of telepresence robots is, they have a face. For communication among several people, which is considered difficult using conventional means like a telephone or smartphone, telepresence robots are expected to be useful as representatives of real people.
"If we make shoulder-mounted robots, this will enable seniors who can’t leave their home, for example, to go out with their families, or to make customary visits to cemeteries and so on, via robots. We think we can support new forms of communication like that."
"There’s a sensor in this ring. It detects where the ring has been pressed. It works by measuring the distance between your skin and the ring. When you rotate it, it detects infrared, and it senses the rotation from the fact that on this side, there’s lots of melanin, so the skin is dark, and this side is pale. That capability can be used in place of a mouse. You can use it to operate an iPad. So, that kind of thing will become possible."
Professor Imai thinks that if, for example, robots with artificial intelligence come to play a role in society, relations among people and groups will become even more extensive. Such robots will be able to join in with people and groups, detect the social atmosphere through their ability to read people’s behavior, and prevent needless conflict in advance by sharing their perceptions with people.
"It’s nice to talk about operating lots of robots or getting robots to read human behavior, but there are many things that people can do but computers can’t. If we become really sensitive to those things, and notice that people can do them easily but robots and computers can’t, I think it would be good if we consider how to enable robots to do such things, and make robots that can. " 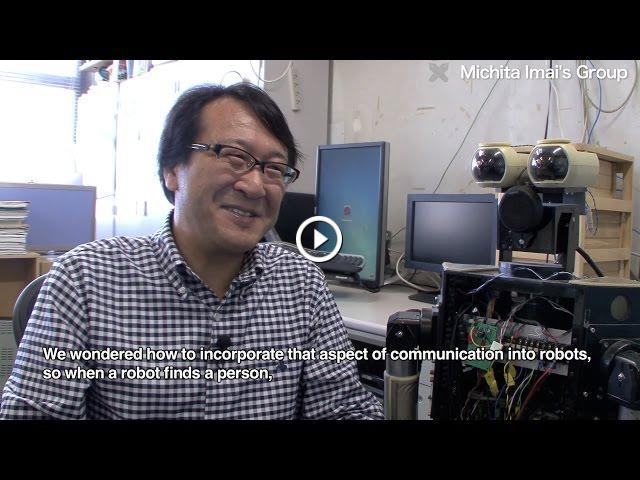 At Keio University, the Imai Laboratory, in the Department of Information and Computer Science (Faculty of Science and Technology), is doing three res...