admin
Japan Sings! The Japanese Musical Film: April 8–23, 2016
This spring, Japan Society celebrates the astonishing yet little-known world of Japanese musical films. The series focuses on the golden age of the "popular song film" starring teen idols and TV stars from the 50s and 60s. It also reaches back to prewar singing samurai and forward to twenty-first century genre mashups – 10 songful cinema gems all on 35mm! Musical performance in these films incorporates Japanese musical tradition as well as the utopian space of the Hollywood musical to create a rich commentary on the intimate and unequal relation between Japan and the USA. This series is guest curated by Michael Raine, Assistant Professor of Film Studies at Western University, Canada.
Tickets: $12/$9 Japan Society members, seniors & students
EXCEPT screening of You Can Succeed, Too + Opening Night Party: $15/$12 Japan Society members, seniors & students
Special Offer: Purchase tickets for at least three films in the same transaction and receive $2 off each ticket! Offer available only at Japan Society Box Office or by telephone at (212) 715-1258. Offer not available online.
(curator's note excerpt)
"When is a musical not a musical? When it has Elvis Presley in it." Rick Altman's seminal essay on film genre offers this question to illustrate the difficulty of defining the musical. It also highlights the difference between the all-singing, all-dancing Broadway adaptation and the typical Japanese musical film, which focused more on "musical moments" in which characters played by popular singers would break into song. The archetypal Hollywood musical was seen as impossibly American--even the most spectacular imitations (in this series, You Can Succeed, Too) ironize the felt disparity between Japan and the U.S. Yet Japanese cinema is saturated with popular music. In some periods it was rare for a star not to release records and sing on film--Suzuki Seijun's go-to action star Jo Shishido released a series of records in the 1960s and it was even said that only the elegant Setsuko Hara did not sing.
------
Visit:
Like:
Follow:
Watch:
Join:
Teach: 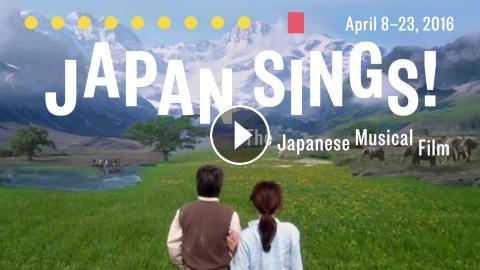