The McLaren 570S is Autocar’s favourite sports car – its five star rating emphasises just how much we like it. But now the Honda NSX is here, Woking’s class-leading sports car has a new challenger to beat.
The NSX uses a mid-mounted 3.5-litre V6 engine with additional thrust from three electric motors. Peak power output is 573bhp, which beats the McLaren’s 562bhp, but the Honda will have to possess more than additional grunt to beat the sublime McLaren package.
We take both cars out onto the open road to find out which is best.
New videos are uploaded to Autocar each week. Don't miss a single one. Subscribe now:
Watch next:
- McLaren 570GT first drive -
- Honda NSX first drive -
- Audi Q5 first drive -
Visit our website at
Read about when these two cars took on the BMW i8:
Autocar, the world's leading motoring magazine and website, delivers industry-leading news, the most in-depth car reviews and opinion from our team of experts. Our presenters include some of the world's top motoring journalists who have unrivalled access to the world's fastest, rarest, most exotic and most exciting cars on some of the world's best roads and race tracks.
Follow AUTOCAR here:
LIKE Autocar on Facebook:
FOLLOW Autocar on Twitter:
FOLLOW Autocar on Instagram:
+1 Autocar on Google+:
Check out our full video catalog:
For car reviews you can trust, subscribe to Autocar: 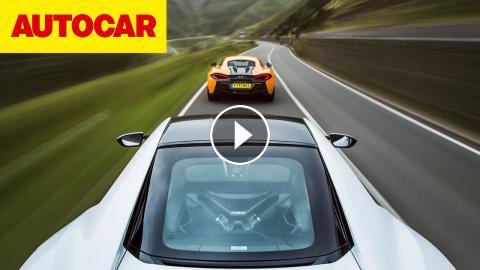